← Ever had one of those “Stop right where you are” moments?
Can we see stillness? hear silence? →

How strong are you at the core?

I’m caught in a bind. Between fit-ness and fat-ness. What I really want to do is motivate people to take ownership in the value of being active. But this message is going out to two groups of people: those who want to fine tune their Maseratis and those who have missed all their 15, 30 and 50,000 mile tune ups. (This predicament is being played out on by business blog – you can find it at Fit2Finish.) But the incident actually occurred in a Facebook comment to my post on planking for fitness. The comment was: “Oh My I was really ready to go until I saw the fit man pic!”

The picture which she is referring to was associated with the post when I put it up on my Facebook page. It was not an accident. I chose it. It’s one used in the article, of Alan Webb, American Record holder in the mile, performing a side plank as part of his training routine. See him here: 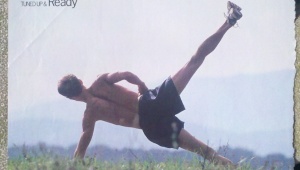 Alan Webb, American mile record holder, and a regular day of fitness for the race.

I find it, and him, incredibly motivating. He has a body which performs the nearly impossible; I like to hold the impossible up and then see how close I can come. Not this woman; she found the image defeating. (or at least she said so. It may have been an attempt at humor or sarcasm but I’ve learned there always is truth behind these.) For her it would be prohibitive in getting started because she fell so far short.

Aha! This is not really a fitness issue. Guess I’m not really in the fitness business. And while I may dabble in the motivational business, healing is really what’s needed. And this country, for sure, has some issues around embracing healthy behavior and eating.

So this comment has me minding what image I associate with my articles. And, let’s face it, most people don’t make it past the images these days. But I found this image motivating. I know athletes will find this image motivating. Youth and people with their health …motivating. But those on-down-the-road will not. That sprinter raced past them long ago and probably kicked up sand in their face.

So, there I am in the middle of that road trying to speak to both audiences, the fit and the fat. (or at least those who think of themselves as overly fat which seems most these days.) I am reminded of the days of my childhood and youth when sports rescued me from the realms of the fat and outcast. I was fit and made the team, so I was never cast out. Some would have considered me fat.

What motivated me then? Pictures of championship athletes. I was a dreamer. But as I grew older the grimy fingers of overweight-ness got a firmer grip. I fell far back from the Alan Webb’s and the Mark Spitz’s, and even the Dara Torres’s. More to the middle of the pack. From there I can relate to these folks who are complacent on the fitness road while constantly exposed to the images all over our media.

It’s all over our shows, our papers, online and in the checkout line at the grocery. Photos snapped by paparazzi because they’re ‘sensational.’ This ugly bulge. That unsightly weight gain. Can you believe how she has let herself go? they say without uttering a word. But photos sell magazines because people feel better knowing that “at least I don’t look like that.” We fear “looking like that” and oddly that impels us to diet and exercise. For a time.

But nothing motivated by fear is lasting. Sure, we know perfection is unattainable, but when did so many switch from pursuing it to running from it’s nemesis?

I guess that’s why I find so much hope in pumping up those kids to discover how fast they can be. I’m losing ground on them, for sure. But, looking over their heads I can keep the perfect in sight. I still find that motivating. In fact, that’s why I run this race. And plank this plank. 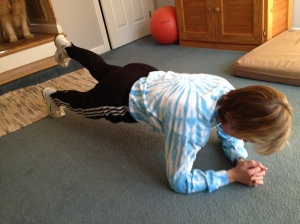 Praying and planking. They go together nicely.

← Ever had one of those “Stop right where you are” moments?
Can we see stillness? hear silence? →