← Happy Birthday, Hamstring!
Are we looking for God in all the wrong places? →

“Play First, Eat Later” is a no-brainer to 4th graders

I played hooky on Wednesday. Usually I spend a half hour at lunch time with a couple of adorable girls at a local elementary school. They’re my buddies, matched up with me as a mentor, because they have been identified as “needing…extra support.” I am not sure of their situations. I expect they are on free or reduced price lunch and probably don’t speak a lot of English at home. But they speak perfectly good English to me at lunch time, so we’re all good.

So, it was with more than a pang of conscience that, this Wednesday, I finagled an invitation to go watch the Washington Spirit’s (the DC area’s new women’s pro soccer team) training session. I’m friends with the head coach and he said there was a fitness person coming to observe their sessions. I should meet her.

So, I played hooky from mentoring on Wednesday to go watch soccer. Now they are an incredibly talented bunch, those pro players, but what struck me more than their skill was their chatter. It was constant. A regular din of soccer-speak. Such a continuous stream that it’s hard to make out what they’re saying. Impressive just for its volume and endurance. But, you would have to hear it to understand, so, I shot some video with my phone.

Yesterday I had a make up day with my 4th grade buddies.

“Where WERE you on Wednesday?” they both asked.

Well, I could tell them, but better yet, I could show them the video. Nothing like action to get your point across, right?

They weren’t impressed. The images were pretty small, orange and yellow pinnies moving to and fro. No one they recognized. No goals scored. The impressiveness of the “chatter” was lost on them. But at least it got them to sit still for a few minutes and eat their lunch.

And that has been one of our problems all year. (Well, my problem.) Here I am with a couple of kids who probably don’t get enough to eat at home, who skip breakfast to come early to do “Girls on the Run” at their school, and they are rushing through their lunches so they can play with me. Isn’t this defeating our purpose?

We are sitting in a small courtyard at the school. Bricked in on all sides. Cement under our feet with a few cut outs for shrubs thrown in some sparse mulch. There are three picnic benches which, as far as I can tell, are only used by us and only since the weather turned nice and someone told us the door was open and we could go on out.

It’s heaven on earth to these two girls. Because there are a couple of big fitness balls and two rubber 4-square balls. One red. One blue. It’s all I can do to keep them at the table. Forget getting them to drink their milk. They want to play. Finally we reach a compromise: they kick the fitness ball to each other, each girl holding their piece of cafeteria-issued pizza. This turns competitive. I am there to field errant kicks and encourage fair play.

When the pizza runs out, I insist they sit for fruit, milk and sherbet. My job, right? To feed them. As they reluctantly comply I shake my head and say, “You know, the adults I work with would rather eat than play. They pay me to exercise with them. Can you believe that?”

The girls eyes get big and their jaws drop open. “Really? What’s WRONG with them?” one girl asks. Then she says, “Let’s make an exercise video!”

And we do. Right there. On the spot. I video: they narrate, act, demonstrate, explain, plead, compel, even chastise. “You adults out there who only want to eat and not play need to exercise!”

They are completely sincere and entirely unrehearsed. Genuine, down to their smiles and the finger-shaking that comes inches from the camera. No way I could have said that with that kind of impact.

Go figure. I’m a pro. But there are lots of ‘me’s’ out there chattering about weight loss and exercise. Each one sounding like the others, a chatter of fitness-speak. But these girls have clear, distinct voices and an unmistakable message.

Imagine, I was assigned to mentor them. 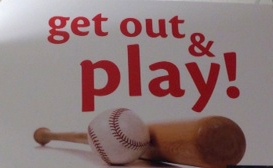 ← Happy Birthday, Hamstring!
Are we looking for God in all the wrong places? →