← Can you hear me now?
Mental gymnastics for fitness, fun and joy →

Looking for truth through fallible eyes

See is believing, right? Well, yes and no.

I was talking with an elderly man who has been colorblind since, well, at least the 10th grade. That’s when they discovered it. When they showed his class the disk with the pixels and everyone else saw 9. He saw 27. 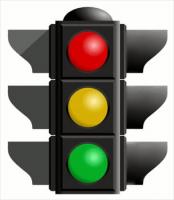 He’s red-green colorblind which is, apparently, the most common form of the disability. This means he can’t distinguish red from green. This presents a unique problem when it comes to traffic lights.

“I memorized the order,” he says.

He sees things in shades. The lit one is brighter gray…I guess. How really would I know? I can’t see what he’s seeing any more than he can see what I see.

Curious. He knows that diamonds and hearts are red. How? Because whatever “color” he sees them, he has learned, is red. Green? same. Purple, same. Yellow, same. He has taught himself to distinguish colors in ways I don’t have to. Literally, he sees color in the shades of gray.

Or, we interpret it differently because of our experiences, our perspective, our “dis”ability.

How do we know what something really is if our senses are all we have to count on? And they’re fallible. Or at least inconsistent, person to person.

“There are some things,” the elderly man says. “I just can’t think of them now.”

“What if there was something we all gathered around, each with our different sensations and perspectives, and it was the same to all of us?” I ask him.

Perhaps the heavenly throne will be like this. Something around which we all can agree.

The only way we’d know it would be to consult the other. Down to the very last one. It wouldn’t be defined by our perspective. Rather, it would be confirmed by our consultation. Non-negotiable. Consensus, without debate.

That would be truth. Wouldn’t you agree?

← Can you hear me now?
Mental gymnastics for fitness, fun and joy →