You can tell a lot about a person by how they set up the nativity set.

I decided this when my daughter arranged the pieces this year. Mary and Joseph were placed outside the stable to make room for the animals to crowd around the new baby. The donkey was looking longingly into Jesus’ eyes. My daughter loves animals.

After noticing this, I have made it an intentional practice to observe the various creche’s, manger scenes, nativity sets, etc. in my travels during this season. I have resisted the urge to “correct” them  – knowing what doing THAT would say about me – except I did pick up the angel Gabriel who had fallen face-forward on a neighboring lawn. I set him upright, which was a challenge because he was in three pieces (interesting Trinity image there), and readjusted Joseph who had been knocked to the left (go figure). To my surprise, the light that had gone out in Joseph came back on. The baby Jesus was unharmed (being of solid plastic with his manger) and Mary was free from the fray. So much for resisting correcting.

Anyway, it has been a nativity set kind of Advent. Even the Upper Room author (December 22) shared her reaction to the child who crowded all the characters as near as possible to the baby Jesus. How unsightly. Let’s arrange them. Give them some space. A bit of room for the display.

And that is what it is – a display. On display, whether we realize it or not, is our impression of and our relationship with this Holy birth. We arrange things how we think they should be. According to convention or tradition or accepted practice. Children don’t do this. They are untrained, a blank slate in the set up. This is just another doll house to them. 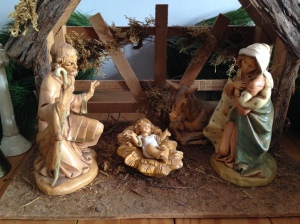 This, of course, has me thinking about how I arrange or re-arrange things. Yes, the characters in the set and the animals and the angels and the choir. The only thing that stays the same year after year is the baby Jesus in the center. He is of two parts with his manger, but I put him in at the beginning of the season, scripturally inaccurate though that might be. In our set, he is blond-haired and blue-eyed and fits only one way: on his back, smiling upward with his hands spread wide to the world.

Really? What if he was a tummy sleeper? What if he was colicky? Was he really chubby? blond? blue-eyed? How much truth is there really in this scene I look lovingly down upon?

What must that stable really have looked like, smelled like, sounded like, felt like? Probably more like the world, at his time and in ours. Mary and Joseph did what they could to welcome the baby Jesus and keep him safe. Even after being turned away from the last room in town. I wonder if Joseph tried to reason with the innkeeper. “But sir, you don’t understand. This baby is the Son of God.”

And so, among the animals, in the cold, damp, dirty stall, He was and is.

But we prefer to arrange things to look nice. Perhaps that is our longing for the greeting we wish he had received. And the welcome we would like to offer him, were He to come among us today. Be born in us today.

We’d prepare a place for Him. Even a child knows this.