← Portion management
Finishing touches may not kill you →

March Madness: only one team gets the trophy

The orange team scores and the crowd explodes. The blue team answers back with a 3-point bucket and their fans jump to their feet. There is stomping and shouting, hugging and clapping. Frenzy in the fieldhouse! It’s madness; march madness. This is single elimination folks. Win, you move on. Lose, you go home. The NCAA championship trophy is on the line.

Next year, let’s change it up, why don’t we? Let’s just play a round robin? Go ahead and wear your uniforms so we know who’s who, but we’ll have the guy running the clock signal when it’s time for the next group to take the court, so everyone is sure to get equal playing time. At the buzzer we’ll shake hands and board the bus for another game in another city. Doesn’t matter who or where. At the end, let’s all just get together at the banquet and hand out the participation trophies. We’re all champions, after all.

I am ever amazed at the ability of sports to show us to ourselves. When nothing is on the line, it doesn’t matter. When something is on the line we discover the very best in ourselves. The key isn’t the winning; it’s the discovering. Which requires that there be only one prize. If we give one to everyone, it not only encourages some to coast without contributing, it devalues the prize.

The Christian life is exactly this: to play in such a way that you might win the prize. If we live as if everyone upon exit from this life is gonna be handed the Jesus trophy just for participating, we miss the point. We’re meant to live as if we mean it, as if everything is on the line.

Participation trophies are our response when ‘what if we don’t win?’ rings in our ears. But that’s fear speaking; not faith. Faith says, there is one prize and room enough for everyone to hold it high. 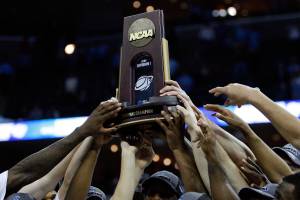 ← Portion management
Finishing touches may not kill you →