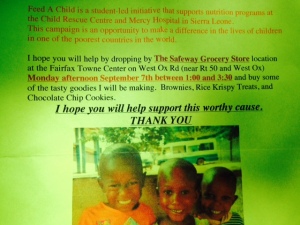 Ok, so Jordan captured me, too! (the same Jordan Pastor Tom mentioned in his e-note). She told me she hoped I would come by her bake sale from 1-3:30pm where she would be raising money for children in Sierra Leone. Who can resist a 7 year old with a sincere smile, a passionate plea and a great cause?

Just as I was thinking, Hey! I could share this on my Facebook page, Tom Berlin swept by and, in a stage whisper, told her, “You should give your paper to her. She’ll post it on her Facebook page. She knows people.”

Irony of ironies, this is the same Tom Berlin who had just preached to us about the evils of social media which all too often distracts us from the important things all around us. So of course, I took that paper, snapped a photo, and shared it via Facebook, tagging Tom in the comments (although not in the post since I knew he would be checking his smart phone during the next service.) 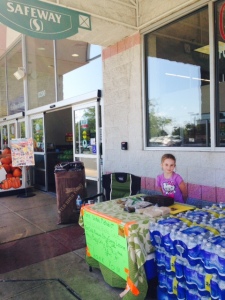 Suddenly, Facebook friends and neighbors who were not even connected with Floris or any church, told me they were planning on going out to support Jordan. So, about 3:15, I drove up to the Safeway and spotted the neon green poster (matching the flyer) on the front of a table outside the store. I strode up expecting to see Jordan and her friends, or Jordan and her brownie troop or Jordan and her soccer team, but no, it was just Jordan. And her Dad. Before I even crossed the street, Jordan looked my way and said, “Hey, that’s the lady I gave my paper to!”

Dad and daughter had been there since 1:00, visiting with folks who stopped by. Jordan tells me some were friends, including one lady who wrote them a “big” check. One was from Hutchison Elementary who said she wanted to help out because Floris supported their school. Another bought some bottled water for them because they “looked hot,” and a couple more dozen bought a baked good or just donated for the cause. “Mostly, they were just nice people who said thanks for doing this,” Jordan says.

It’s the cause that’s important to Jordan. She knows she is fortunate to have so much and that Sierra Leone is one of the poorest countries in the world. She wants those kids to have what they need, like she does. Jordan’s not new to fundraising. She set up a lemonade stand last spring as part of the Imagine No Malaria campaign. “That did pretty well,” she tells me, “but I thought I could do better at the shopping center near my house because more people would come by.”

Jordan picked where to set up her table by watching to see how busy the places were so she could maximize her traffic flow. Her first choice store turned her down saying, “the manager might get mad.” Undaunted, she told her Dad, “Let’s just go somewhere else.”

“Kevin, the manager at Safeway was very welcoming,” Neal Ramsey said, surprised given the huge number of requests he probably gets. The employees were probably pretty happy, too, because they got the leftovers from Jordan’s baking – brownies, Rice Krispy treats and chocolate chip cookies.

Jordan collected an even $200 for her afternoon’s work (actually $199 but Mom and Dad made it an even $200). She’s not keeping any, she assures me. All of it will go to the church so they can use it for the children who need it. Will she have another fundraiser? Jordan thinks so. Probably in the spring. She’s not sure if her friends will come, but she’s sure her Dad will.

Neal says, there’s nothing he’d rather do than spend time with his daughter, chatting about ‘whatever’ all afternoon. He says the fund raising is her idea. “It’s hard to stop her. She pulls us along with her. When she says she wants to do this, what am I gonna do, watch football?”

Nope. No tv here. No phones, tablets or screens in sight. When I tell her that I hope to share the story about what she is doing, she thinks that’s okay. “Maybe my friends will see what I did and they’ll do it too and it will keep going and going and we’ll get lots of money for the children.” When I ask if I can take her picture for the blog, she smiles and says yes. Then she doesn’t smile for the picture. This is serious business, after all.

On my way back to the car, after donating and selecting my chocolate chip cookies, Jordan has me thinking about the privilege and the power of social media. So often we caution our children about its dangers. ‘Don’t get caught up in it.’ ‘Be careful what you share.’ ‘You don’t know who’s reading.’

What if they live a life so admirable and so transparent that it can be freely shared in the hope that others will see, and be inspired to join in. Just like Jordan.