← Who’s Stealing Your Good Day?
Getting it Straight from the Source →

It’s a Wonder We Ever Forgive

Why are we not more grateful? That’s the million dollar question, or actually the $140 million question (adjusted for inflation) posed to us in the parable of the Unforgiving Servant, who, once he’s been forgiven his huge debt, refuses to extend the same kindness to his own debtor. 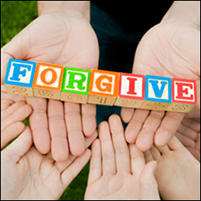 Why does this central message of the New Testament not evoke a greater response in our hearts? When we’ve been forgiven such a great debt, why are we so stingy in releasing our debtors? Dr. Rilling wonders, “Can it be that we treat forgiveness so lightly because we fail to see that forgiveness is costly – even for God Himself?”

Do I really believe that? What does it cost God to forgive me? I mean, He’s God. God’s loaded, right? What’s a few million? I’m worth it. He’ll never miss it.

But wait. This isn’t just a business write-off. When God forgives, he doesn’t just take up his heavenly pen and X-out that obligation. He can’t. He’s God. There are rules, checks and balances. He’s full of Mercy AND Justice. Keeping the books straight demands that He assume the debt Himself. Whoa. I’m not sure I ever fully considered this.

Redeemed is redeemed. I may be debt free but not exactly scot free. God doesn’t want to leave me with an obligation I can’t possibly re-pay, so He has assumed my debt. How great is that?! He doesn’t hold it against me, doesn’t bring it up on the balance sheet, doesn’t wave it in my face and say, “You know, since I …” Nope. None of that.

And pretty soon, that big old debt is teency weency in my rear view mirror as I speed away. Not a care in the world out on the open road. And that’s exactly the way God wants it, so I am free to pay it forward. And there’s the rub. Because, while doing something nice for someone – when it’s convenient and I think of it and I have the resources and spare time – is pretty darn easy, forgiving someone for a BIG wrong can be nearly impossible. How can God possibly expect that from little old me?

BIG wrongs set aright makes me think of Eva. She and I became writing friends several years ago, meeting at a local coffee shop where we traded stories about life and kids and work and worries. Over time I learned that Eva was in the midst of a terrible, true story. For years she had suffered domestic abuse as I had never heard it described. Beatings and things thrown at her, emotional lashings and mental attacks. Immobilized by fear, she had endured the torment for years. Until one day, she took the kids and ran for dear life. Here, with new names in a new state many miles from her torment, she prayed he wouldn’t find them.

Oh, how she had suffered. How God must have suffered with her. If anyone ever had the right to withhold forgiveness, it was Eva. She should demand that he acknowledge the pain he had caused, admit his fault, and make amends before she even considered an ounce of forgiveness. Yet, over time, she extended it to him without condition. Not because he deserved it, but because she did. Insisting he do the first forgiving left her at his mercy. She couldn’t have life that way. Once she released him, she was completely free to navigate her whole world differently.*

I am so thankful for Eva’s example. Today, she and her boys have moved back to her hometown and found a healthy life amid family and friends. She is living the grateful life, but it nearly cost her everything.

Give us this day our daily bread.
And forgive us our debts,
as we also have forgiven our debtors.
And do not bring us to the time of trial,
but rescue us from the evil one.

While forgiveness-received is a blessing, forgiveness-delivered is freedom. It allows us to step into our God-designed future. Apparently, that’s worth everything to God.

*Eva and her children returned to their home town of Anchorage, Alaska where she established the Eva Foundation whose mission it is “to help survivors of abuse regain their self-confidence and independence and… to secure an abuse-free future for themselves and their loved ones.” Visit her website to read more.

**Author’s note of thanks. This post was approved, sight-unseen, by Eva Welch, who says “you can use my name anytime.” Ah, the sweet, sweet sound of Freedom. Thanks be to God.

← Who’s Stealing Your Good Day?
Getting it Straight from the Source →