The Writing is On the Wall

Does anyone here read cursive?

Apparently they’re not teaching it to most elementary school students these days. This has created quite a stir and not a small amount of dissension among ‘old-timers’ who don’t want this stalwart to go and ‘new-timers’ who say its time has passed. Recently, scientists have suggested that script hand-writing, with its flow of connecting the letters, may tap into our learning and creativity in ways that printing and typing cannot. Old world meet new.

Call me old-fashioned but I do write in cursive when I pen notes and letters to friends, colleagues and pen pals. It’s where I began as a writer. Often those notes seemed to say way more than I wrote in them to the one who received them. I think my brain region for cursive script might be very near the prayer center. Anyway, I do resort to printing when writing to the younger generation because I’m told they sometimes have a hard time deciphering cursive. Or maybe it’s just that my hand-writing is deteriorating. 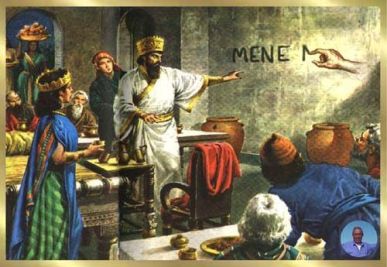 This comes to mind as I read from Daniel 5, the story of a Babylonian king gone so wrong that a mystical hand appears at the banquet he hosts for a thousand of his nobles and begins writing a message on the plaster wall of the royal palace. Apparently it’s not good news and the king knows it; a guilty conscience has him shaking in his sandals. Give the king credit, he really wants to know what the message says, but there’s not a soul at the royal table who can read cursive (or perhaps Aramaic in this case).

“Bring the enchanters, the Chaldeans, the diviners! I’ll pay handsomely whomever can decipher this!” orders the King, as if this was invisible ink and a black light can enlighten the words and translate the secret code. As it turns out, this is difficult script; no translator can be found. Intrigue abounds and the plot thickens. The writing is on the wall…what could it mean?

Pause here: Now who doesn’t love a good mystery? The fingers of a human hand etching an unknown message. This is great theater. So much so that the phrase “the writing on the wall” has not limited itself to script or scripture, but found its way into the common lexicon. People who have never read the Bible may huddle in the face of dire times and lament, “Well, the writing is on the wall.” Urban dictionary translation: the jilt is up, what’s gonna be already is, and there’s nothing we can do about it.

But fortunately for King Belshazzar, terrified and pale, his queen comes to the rescue. “May the king live forever!” she says (ironically). “Don’t be alarmed! Don’t look so pale! There is a man in your kingdom who has the spirit of the holy gods in him. In the time of your father he was found to have insight and intelligence and wisdom like that of the gods… Daniel was found to have a keen mind and knowledge and understanding, and also the ability to interpret dreams, explain riddles and solve difficult problems. Call for Daniel, and he will tell you what the writing means.”

This Daniel, one of the old-timer exiles brought from Judah, could in fact read the script, having probably inscribed some cursive on scrolls of old. He, without new age divination or enchantment and without calling on the gods of silver and gold, of bronze, iron, wood and stone, called instead on the God he knew would send the Holy Spirit to interpret the words before the king.

This is what he read: mene, mene, tekel, parsin.

Without mincing words, Daniel informed the king that:

If that’s not a sign of the times, then I don’t know what is. The writing is on the wall. Once we know what it says, we’d do well to acknowledge that we, God’s people and all God’s children in these days, have wandered in our own ways. We have a lot of mending to do.

Does anyone still read script?