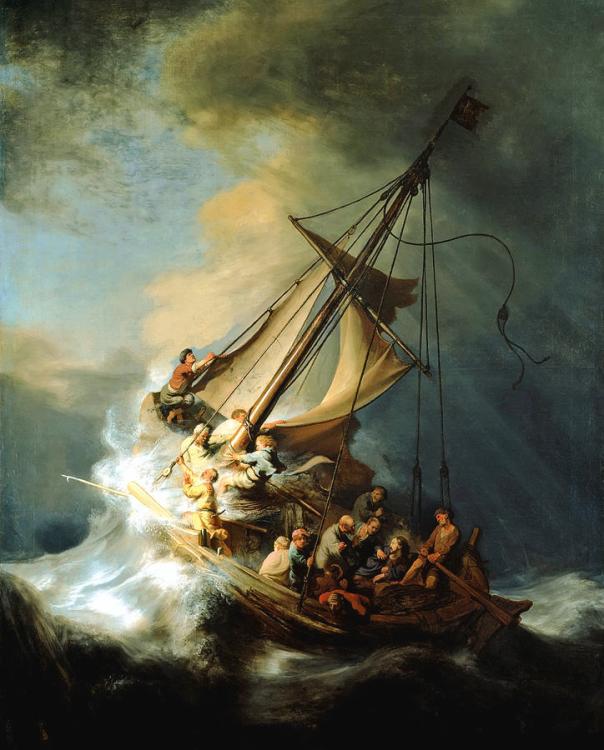 “All hands on deck!” the captain hollered, as another towering wave crashed over the bow.

The cabin of our barely sea-going vessel was already knee-deep with water. We were bailing as fast as we could, but the storm was beating us down. How do you make headway in a blinding rain when every wave threatens to throw you overboard?

“Cap’n, we’re gonners,” I shouted between bucket fulls. “This little fishing boat’s not…” A mouth full of salt water interrupted me as the next swell tipped us nearly sideways and sent me sprawling. Dragging myself upright, I was surprised to see the death grip I had on my bailing bucket. Nope. Not gone yet.

Thank goodness I’ve got me some sea legs. Always did love being out on the ocean. Those churning waves never bothered me. Never made me queasy either. I’d even tease ’em by standing deck side with feet spread and arms wide to ride the waves like a surfboard. Not a one had ever bucked me off my feet. Until now.

“Just bail, sailor,” shouted the Cap.”Best give that mouth a rest.”

That’s when I saw him – yes him, Jesus, whose bright idea it was to set out across the lake. He was asleep in the stern. SOUND asleep. His head on a pillow, having a nice dream, judging from the peaceful look on his face. Sure, the boat was rocking mightily and the waves were drenching him over and over. But he was paying ’em no mind. Just sleeping.

What was WRONG with this man? “Teacher, can’t you see we’re about to drown here?!”

Another wave, even bigger than the last, submerged the bow and swamped the cabin again. All of us were tossed to our knees as the boat was slammed by the cresting wave. It was a miracle the boat held together at all. Our little crew of twelve was helpless in the face of it.

And there was Jesus coming awake, rising to take in the scene, perfectly balanced and not a hint of falling. No proud bucking bronco rider, he was standing calm and still, like it was nothing, as if there was the firmest of ground under his feet. The look on his face was not panicked or anxious, not worried or rushed. He simply surveyed the splay of men, kneeling waist deep in water to his right and to his left, and frowned.

Then he looked up at clouds and sky and sea and raised a hand to them. “Quiet! Be still!”

And I’ll be damned if the wind didn’t stop and the lake didn’t turn still as a pond on a windless day. And there I was, incredulous and staring, frozen and kneeling at his feet. He shook his head slowly and spoke to me, for I was the closest to hear him. “Why are you afraid? Do you still have no faith?”

I took the hand that he offered to help me up, and I stood right there. Right in the place where my Teacher stood, I turned to look as he had been looking from the stern of the boat ahead to the bow. The stormy sea still raged to our right and to our left, the ocean roiled, the rains pelted, and the angry clouds persisted. But here where I stood, it was still. Perfectly still. Without exertion, preparation or effort, I could stand as if on solid ground.

“Set a course for straight ahead,” the Teacher said.

Looking around, we could not find him. Not I, nor the Captain, nor the rest. But bailing done and sails raised, the Captain gave the command. “Straight ahead! Steady as she goes.” We set sail with the prevailing wind toward the land on the distant horizon which was our destination. To our right and to our left, I knew the storm raged on. I could hear it. But I didn’t turn to look. My faith depended on it.

I was no longer afraid.