← Only Love Can Do This
A Private Message from God →

The sea has parted forming a wall of water on both sides and a commanding voice booms, “You may paaasss.” That’s how I have always pictured the scene as the ancient Israelites marched, en mass, through the red sea on their way out of Egypt. I imagine Moses at the helm, smiling triumphantly, exuberantly and perhaps a little relievedly as his magic staff actually accomplished what God had told him it would: Let my people go!

Yet, according to the book of Exodus, the Israelites were none too sure about things, Red Sea parting or not:

As Pharaoh approached, the Israelites looked up, and there were the Egyptians, marching after them. They were terrified and cried out to the Lord. They said to Moses, “Was it because there were no graves in Egypt that you brought us to the desert to die? What have you done to us by bringing us out of Egypt? Didn’t we say to you in Egypt, ‘Leave us alone; let us serve the Egyptians’? It would have been better for us to serve the Egyptians than to die in the desert!” ~ Exodus 11:10-12

“Was it because there were no graves in Egypt that you brought us to the desert to die?” Ironically, this was the phrase that overtook me as I encountered the actual desert for the first time. The Sahara of North Africa was stark, dry, and barren; sand upon sand as far as the eye could see. 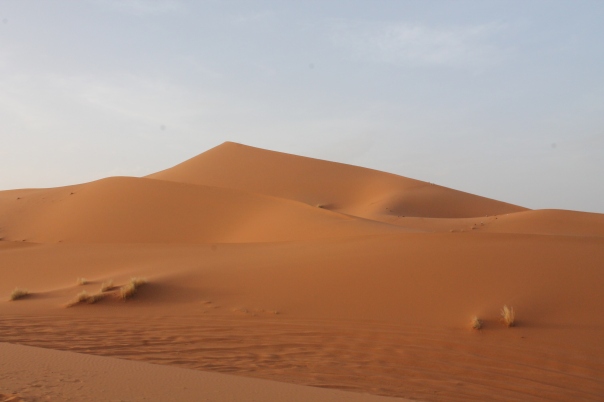 I had been looking forward to this family excursion for months. The trip was planned, a guide secured, preparations made, clothing purchased, and accommodations booked. All was made ready for our travel to Morocco. This day’s journey was the trip’s crown jewel: riding camels through the desert to a campsite where we would spend the night in tents under the expanse of a night sky, completely unspoiled by ambient light of any humankind. We would be alone with the stars in the desert. What bliss…

But first, the desert. Just mounting my camel was a bit harrowing as she lurched forward and then backward to achieve her standing, but as the guide led our small family group toward the dunes, I settled into the clippety-clop rhythm of my ride. I even loosened my death grip on the saddle slightly as we started up the first dune. 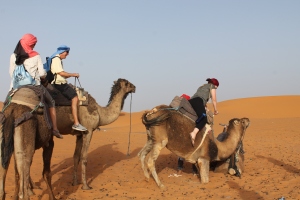 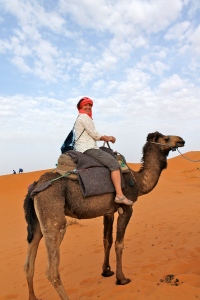 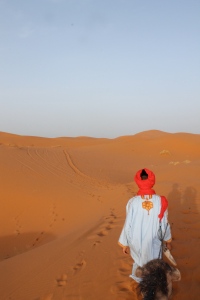 The setting was like nothing I’d ever seen. It was the purest expression of two complimentary colors: an infinity in grains of carmelized sand piled against an inestimable expanse of sky blue. The line separating them as if a kindergartner had drawn it with a crayon. The scene was miraculous, both breathtakingly beautiful and ominously frightening.  Fear and awe all at once.

No greenery. No trees. No water. Only sprigs of dried grasses. Hardly a sign of life of any kind. And we were setting out into it. All I could think was: Was it because there were no graves in Egypt that you brought us to the desert to die?  Those Israelites had a point. Just imagine being led away from everything you ever knew, all supply, all solace, and all resources into a promised land that looked anything but promising. My judgment of those Israelites was premature. I forgive them their doubt.

And yet, the awe and beauty was palpable in its simplicity, quiet, and tranquility as we upped and downed the dunes. Silent movement. Slow trudging progress toward… How did our guide know which way to go with no landmarks and no visual cues? Everything looked exactly the same to me. The occasional brave pebble rolled downward, displaced by our camels’ hooves, but a brief gust of sultry wind would wipe away the footsteps and remove all evidence that we were here. 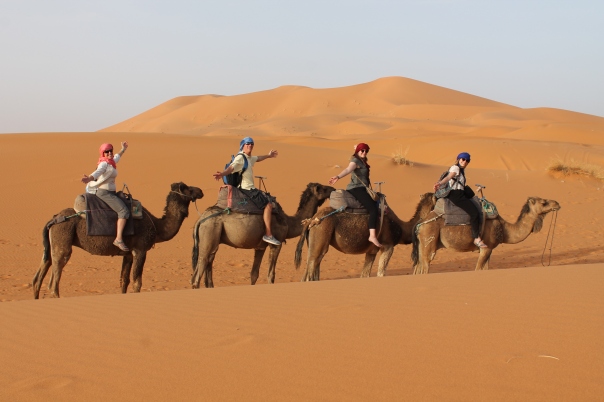 We had placed our well-being in the hands of our guide, a mere teenager. He was a member of a nomadic tribe whose family had lived and loved this land for generations. He didn’t speak our language and we didn’t speak his. Still, we let ourselves be guided and came to trust our sturdy rides – up and over, out and around, over and back, side hill and downhill – as one does the mule who carries you along the switchbacks overlooking the Grand Canyon. They don’t often lose people on these trips, I told myself. 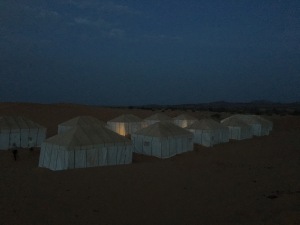 When the campsite came within view, I confess I exhaled a relieved sigh. Light was growing dimmer and all of me could use a rest. It had cooled off from the daytime 105 degrees to an evening “low” in the upper 90’s. As evening fell and stars appeared overhead, we trudged up the nearby dune to get a closer look. Laying back and resting on the fine, dry Sahara sand, we looked up at the stars – the same ones that overlooked all the earth’s inhabitants and the very same that accompanied the ancient Israelites; these still they twinkled down at us. I was completely entranced.

The miraculous always astounds me. With reverence, we set off to see and understand and experience on holy ground. Then we come before God in complete awe and He reminds us of his promise to Abraham and his son Isaac, and through them, to us.

“I will surely bless you and make your descendants as numerous as the stars in the sky and as the sand on the seashore.” ~ Genesis 22:17

Now, it seems odd that the Lord spoke of the sand on the seashore to a people in the desert. Perhaps, he had in mind to part the sea. 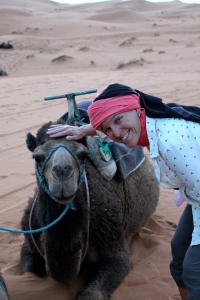 Wendy, the author, and her trusty camel, Rosy.

← Only Love Can Do This
A Private Message from God →