Lions, Tigers and Bears, No Problem

There is a story about a boy, but not just a boy, a shepherd. He stood watch over his flocks day and night, protecting them from whatever might come to harm them. Lions and bears, he would fight off, with his bare hands, if necessary, for he had no weapons of war. No sword, no gun, no armor. But, what he had, that was enough.

The boy grew to be strong and courageous out there in the fields, watching and protecting what he loved against all that would harm it. You know this boy, for his story made him famous. His name was David and when all others trembled in the face of fear before a giant enemy, David did not.

The story goes this way:

David said to Saul, “Let no one lose heart on account of this Philistine; your servant will go and fight him.”

Saul replied, “You are not able to go out against this Philistine and fight him; you are only a young man, and he has been a warrior from his youth.”

But David said to Saul, “Your servant has been keeping his father’s sheep. When a lion or a bear came and carried off a sheep from the flock, I went after it, struck it and rescued the sheep from its mouth. When it turned on me, I seized it by its hair, struck it and killed it. Your servant has killed both the lion and the bear; this uncircumcised Philistine will be like one of them, because he has defied the armies of the living God. The Lord who rescued me from the paw of the lion and the paw of the bear will rescue me from the hand of this Philistine.”

Saul said to David, “Go, and the Lord be with you.”

Then Saul dressed David in his own tunic. He put a coat of armor on him and a bronze helmet on his head. David fastened on his sword over the tunic and tried walking around, because he was not used to them.

“I cannot go in these,” he said to Saul, “because I am not used to them.” So he took them off. Then he took his staff in his hand, chose five smooth stones from the stream, put them in the pouch of his shepherd’s bag and, with his sling in his hand, approached the Philistine.

Meanwhile, the Philistine, with his shield bearer in front of him, kept coming closer to David. He looked David over and saw that he was little more than a boy, glowing with health and handsome, and he despised him. He said to David, “Am I a dog, that you come at me with sticks?” And the Philistine cursed David by his gods. “Come here,” he said, “and I’ll give your flesh to the birds and the wild animals!”

David said to the Philistine, “You come against me with sword and spear and javelin, but I come against you in the name of the Lord Almighty, the God of the armies of Israel, whom you have defied. This day the Lord will deliver you into my hands, and I’ll strike you down and cut off your head. This very day I will give the carcasses of the Philistine army to the birds and the wild animals, and the whole world will know that there is a God in Israel. All those gathered here will know that it is not by sword or spear that the Lord saves; for the battle is the Lord’s, and he will give all of you into our hands.”

As the Philistine moved closer to attack him, David ran quickly toward the battle line to meet him. Reaching into his bag and taking out a stone, he slung it and struck the Philistine on the forehead. The stone sank into his forehead, and he fell face down on the ground.

So David triumphed over the Philistine with a sling and a stone; without a sword in his hand he struck down the Philistine and killed him. ~ 1 Samuel 17:32-50

David did not fear lions or bears because he had defeated them with his bare hands.

But sometimes there is a tiger in our midst. And, with Dorothy of Oz, we are afraid — duly afraid of the three: lions, TIGERS, and bears, oh my! The lion and the bear maybe we can handle, but that tiger…

Didn’t stop David. That boy had been battling lions and bears for years. The tiger Goliath? He is just a striped lion. “The Lord who rescued me from the paw of the lion and the paw of the bear will rescue me from the hand of this (Tiger).”

David met Goliath and walloped him, with just a sling a few smooth stones. For “it is not by sword or spear that the Lord saves; for the battle is the Lord’s.”

No matter who or what is your tiger today, may your battle be the Lord’s.

Photo by kailash kumar on Pexels.com

Dear Graduates, chart your own course 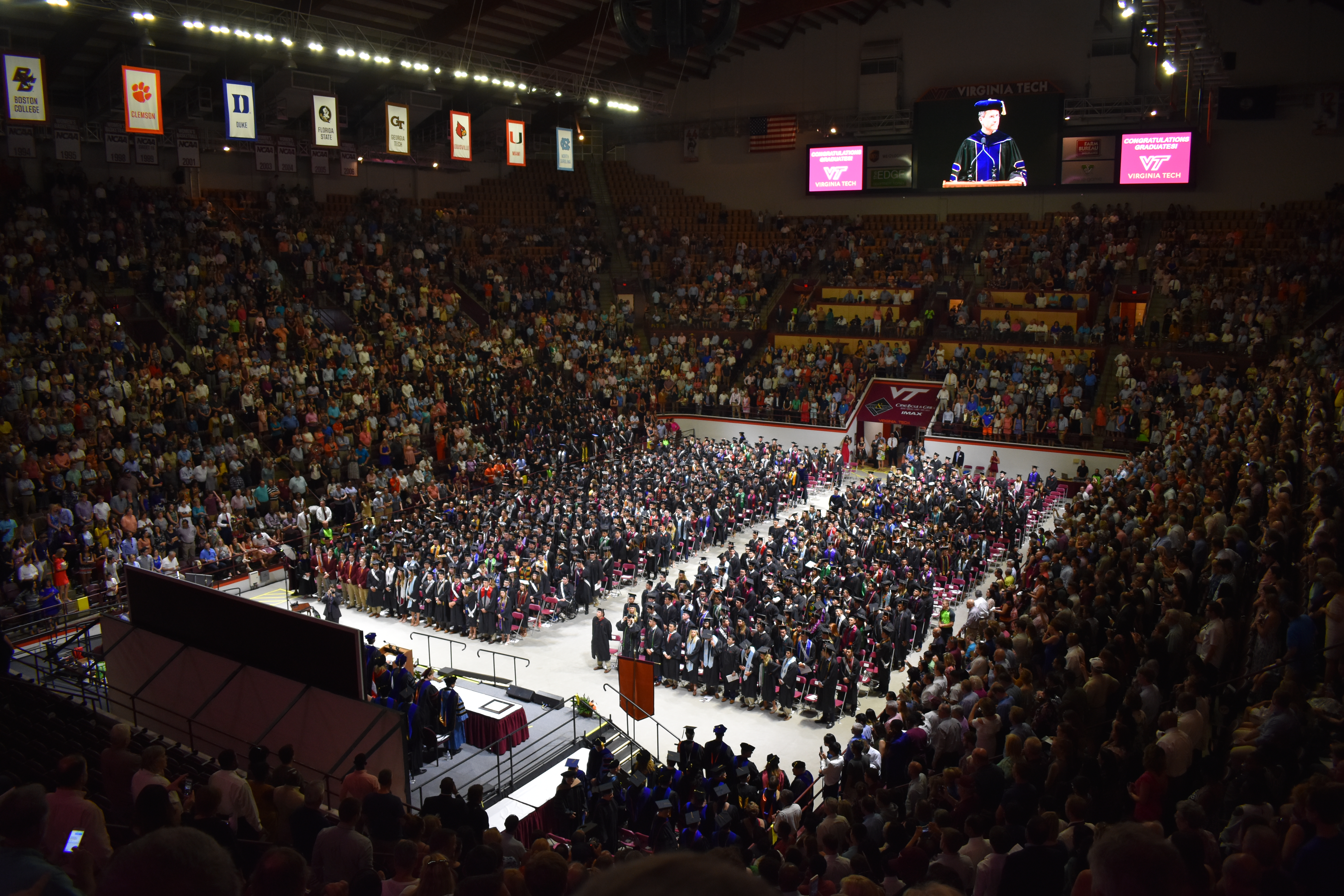 Caps and gowns everywhere! Smiling faces. Proud parents. Adoring Grands and even congratulatory hugs from siblings. It’s a great occasion and we mark it with well-deserved fanfare. Pomp. and. circumstance.

So many graduates! I imagine each of them bouncing on their own personalized trampolines, springing giddily into the air, paying no heed to the creaking complaints of metal springs better suited to children’s play. These celebrants are ready to boing to their next appointment: be it career or college, military or volunteer service, or perhaps just promotion to the next grade or next level school.

Congratulations! Way to go! But, I pray, dear young people, that this day is more than lift-off for you. May it also be deflection point. 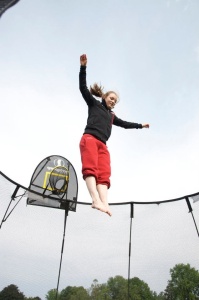 Because so much in your world to this point has demanded that you achieve maximum height: jump higher, score better, achieve more, set new records or perform the best aerial trick. Success on that life-trampoline rewards perfect landing and launching from the same spot. No deviation. Simply master the repetitive motion. That’s more tantrum than lift-off.

I pray that on this graduation day you may embrace a little deflection. Accept permission to stop jumping straight up-and-down.

On an Easter evening two millennia ago, the disciples of Jesus experienced a graduation ceremony of their own, but it was no cause for celebration. Jesus had been crucified, died and was buried. Up until then, when Jesus said, Jump; they said, How high? But now, without the one who was their teacher, leader, and counselor, they cowered in fear.

On the evening of that first day of the week, when the disciples were together, with the doors locked for fear of the Jewish leaders, Jesus came and stood among them and said, “Peace be with you!” After he said this, he showed them his hands and side. The disciples were overjoyed when they saw the Lord. Again Jesus said, “Peace be with you! As the Father has sent me, I am sending you.” And with that he breathed on them and said, “Receive the Holy Spirit. ~ (John 20:19-22)

The disciples needed deflection. Following the leader was no longer an option. To stay the course, they needed to chart it themselves. In the peace that only Jesus can bring, their Lord sent them.

Dear Graduates, congratulations on your arrival at this day. From its precipice, look into your distance to notice what calls you, and listen for what draws you. Breathe that in. Let it inspire you. Let it energize you. Allow it to bring you peace. And then, let it deflect you toward a future that has been designed for you. Play that angle. Even the slightest deviation, multiplied by your landing force, will send you into new air space that you have not yet sampled. 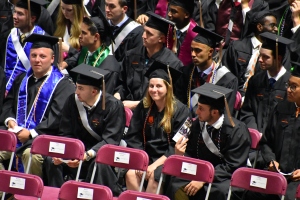 Memorize that feeling; it’s called courage. You’re charting new territory. Take your momentum with you and spring for all your worth. Hey, bouncing up and down on your backyard trampoline never had much growth potential anyway. Let the deflection take you — to scary places, challenging places, and into untrod territory that desperately needs new minds to solve old problems.

Go and may the peace of Christ be with you.