There’s been an explosion, but there is no bomb

Shell-shocked.
I’m flattened,
literally, thrown to the ground
by the hand grenades being heaved in my land.

There’s been a bombing,
but there’s no shrapnel,
no visible debris,
just many, many injuries.

Bodies strewn everywhere,
writhing in pain.
Bandaging their wounds,
wrapping their torn limbs.
Some, sitting motionless on the cement,
with hands pressed to their ears,
cry, “Make it stop”
“Make it stop”

Can anyone see them?
I stumble and fall,
gashing my leg on the rocks,
fording the rubble,
trying to reach them.

Does anyone hear them?
Yelling! Screaming! Crying!
It doesn’t stop.
Oh, blessed silence,
where are you?
I would listen if you came.

I would read and listen,
for information, not ammunition.

I would ask and listen,
be inquisitive, not an inquisition.

I would seek out and listen,
for those with little life experience,
and those with much.

I would meet and listen,
face to face and full of attention,
delving for meaning, certain of purpose.

What is the world making of us?
that we have forgotten
how to listen to each other and
become numb to ourselves?

We are meant to make of this world!
to be creative forces
using our hands to hold and our hearts to unfold,
applying ourselves to build,
something of each other.

There’s been a bombing but no explosion.
The ringing in my ears
is the sound of deafening,
the tearing limb from limb
of innocent souls.

Dare we feel it deeply?
Let it hurt us enough
to make it stop?

By Our Wounds, We are Healed

You don’t start out the best at anything. The only way to get better is to work at it. Things take practice and patience, trial and error, falling down and getting up. Three years ago this April, I fell and could not get back up. I needed help, which included a repair to the hamstring tendon which had become detached from its site of origin. Sewing and bit of skeletal carpentry would be necessary. (I also began blogging then. You can find that story here.)

Today, the attachment is good as new, but not the hamstring. Oh, it works pretty well. I can run and jump and play without concern. Just every now and then, when I get in just the wrong position, it panics and balls itself up. This is inconvenient and can be a bit embarrassing because there is no inciting event. Nothing startles or irritates. I am just sitting or getting up or kneeling and bingo. Hello says the hamstring and I am at its mercy.

This wouldn’t have surprised anyone back in the days when I hobbled around in a brace. They expected my gimpiness and disability. But now that I am healed, I should be good as new. Well, I am new, but I need to qualify that good. I am the product of repair. I bear the scars, inside and out, of all that life has hurled at me. And that is good. In fact, today I would say that is very, very good.

But oh my, the list. When I go to see a new doctor he wants to know my “history.” Not just of this ailment, but of all the things that have ailed me. What hurts, what has malfunctioned, what’s been repaired, modified, extracted. All that’s ever gone wrong I’m supposed to write on those few puny lines. Oh, if he only knew. Then he would know me.

So, in these days after Easter, I am sitting vicariously with those cowering 11 disciples in the Upper Room. Had I been fortunate enough to be among them in those days, I surely would have been around that table, worrying, lamenting, fearing the worst, right along with them. And suddenly Jesus is among them. They weren’t expecting that, clearly weren’t expecting him. In fact at first they didn’t recognize him. Here’s how John recounts it:

On the evening of that first day of the week, when the disciples were together, with the doors locked for fear of the Jewish leaders, Jesus came and stood among them and said, “Peace be with you!” After he said this, he showed them his hands and side. The disciples were overjoyed when they saw the Lord. Again Jesus said, “Peace be with you! As the Father has sent me, I am sending you.” And with that he breathed on them and said, “Receive the Holy Spirit.  ~ John 20:19-22

Once he showed them his hands and side, they “saw” him. I had always thought that Doubting Thomas was the only slow one, but apparently not. They didn’t know it was Jesus, it seems, until He showed them his wounds.

And so I think of my “wounds.” After I die, this is how people will be able to positively identify me. Regardless of the lifeless state of my physical body, people will know me by the dental work I have had done, the thumb tendon I had replaced, the bunionectomy that realigned my right big toe, the scar over my right eye where that girl headed me in the head playing soccer in college, the C-section lines where emerged two of my children, and yes, the stitch marks where they sewed back my damaged hamstring tendon. They will know me by the marks on my hands and feet, the scar on my forehead and the gashes in my butt and belly. They will know me by my wounds, that have been healed. The evidence remains.

How compassionate of the Living Christ to show this to those cowards in the Upper Room. See these? Now you go and live life, battle scars and all. That’s how they’ll know you have lived, just as it is how you know that I live.

When we bolt the doors against fear, we don’t keep hurt out, we lock ourselves in. Thank goodness God broke in to show us the Way out!

This weekend I will be working with Samantha,* a 15 year old, one year out from her ACL repair. ACL, for those who are not sports enthusiasts such as myself, is short for anterior cruciate ligament; it’s a criss-crossed ligament in the knee. It’s become quite prominent in the news because so many young athletes are tearing them. But the reason we hear so much is because it’s a show-stopping injury. It not only takes you out of the game. It takes you out of your sport for 9 months of more. For an athlete, that means it takes you out of life.

So Samantha was excited to get back into play. Except, she told her dad, the knee just doesn’t respond like it used to. And that’s why they called me.

I know exactly what Samantha is talking about. Or, nearly exactly as I had a take-some-time-off-from-life injury 2 years ago. Tendon torn in two. Surgically repaired. Braced. And slowly, slowly, slowly rehabbed.

It’s funny how the body responds to an injury like this. It seems to go into “protection mode.” It slows down and takes it easy. It does everything carefully. It ‘thinks’ about everything before it tries anything. I remember standing at the top of our staircase looking down at the 16 or so steps I would need to navigate on crutches and thinking, Wow, here I am in Innsbruck atop the Giant Slalom course. It was like I was poised at the gate waiting to break the electric eye and start the clock counting down my championship run. 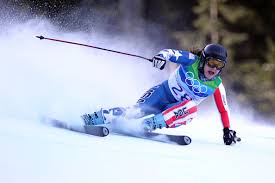 Only problem…starting. I had to lean out over the chasm, place my rubber crutch ends on the first step and swing myself down onto the first step. Yes, I would be suspended in mid air for a second. Does that sound wise for someone who has just had serious surgery?

That’s what my body thought. Be afraid. Be really afraid.

Somehow, over time I overcame that fear, and bit by bit I negotiated the stairs. But as long as I was on crutches, it still looked like the Downhill course. And I think that was my body’s doing. It was protecting itself. Sowing a bit of holy fear and caution in me. And that’s quite adaptive.

But, after 9 months or so, it becomes habitual. The moving slowly and the cautiousness become patterned into my movement. Not to mention the ease-factor. Hey, why not hit that auto-open button on the door. It’s so much easier than to risk rousing those slumbering abdominal and shoulder muscles.

And this is where return to regular movement and, for Samantha, competitive play, get hung up. Oh, we may train back the strength and the range of motion and the endurance, but that quickness and reflexive responsiveness just aren’t there. Unless we call on them.

Training slowly and surely makes us strong and reliable, but it doesn’t make us quick. Quickness comes when we train it. Drills which require using lightness of foot and nimbleness of heart and spirit are required. At first, we must think about them, plan them, and repeat them again and again. But, over time, as we apply ourselves, they become automatic. We notice they are reflexive again. We know them when we feel them. Or, ironically, it’s when they don’t get our attention that we know we are healed. And whole. And fully ready for action.

I wonder how ready I am for God’s action. Are my reflexes tuned? If He called on me to respond quickly and precisely, would I do it without thinking? Or perhaps the more difficult question: when I respond reflexively, is it a God-reflex? Is it what God would have me say or do in that moment? Without thinking?

Call me odd, or embarrassing or even irreverent, but don’t call me to stop. I was tapping my foot to the beat of the music in church on Sunday. And not clandestinely in my pew. I was kneeling at the communion rail. But the praise band was wailing away right in front of me? What’s a body to do but respond with what comes naturally?

Probably no one else noticed. But I take it as a good sign. That the beat of praise moves me. I think I must just have been made that way.

*Samantha is not her real name.