It’s empty now.
Empty of the thimble that belonged to Mom
and the fragile figurine. Gone is the
tiny pot with matching tea cups,
spattered in blue paint. And the
mini toilet seat with lifting lid.

Even the infant starfish
that accidentally tagged along
in our dive bag is somewhere’s else.
So many treasures,
gone missing or
set aside for later days.

It’s empty now.
As it has been for some time,
gathering dust and watching:
three children grow bold and strong,
several pairs of pups
playing and loving their ways into
hearts that will never be without them.
A father learn to lead without compelling
and a mother learn to follow without resisting.

It’s empty now.
And yet…

Each opening is perfectly sized:
More e’s than q’s,
more s’s than w’s,
but r’s and h’s, nearly the same.
The printer knows,
What runs low he replaces, because
What is receive without e’s?
What is suppose without s’s?

I am perfectly proportioned
for the letters meant
for the words I’m to share
in the notes, cards, and messages,
in the conversations and calls,
in the texts and emails.
Yes, even the poems, posts, and prose
are already supplied,
as are the comments, both
spoken and unspoken.
A work in progress, that listening.

“I’m not empty!” says the printer’s tray,
sounding a bit offended.
“I’m perfectly proportioned – to the very last letter –
to hold the words you will convey
with your life.”

The Life of a Book

My paternal grandfather didn’t set out to be a writer. In fact, I’m told he wanted to be an opera singer. These aspirations took him traveling across Germany where he learned to speak the language fluently and, as it turns out, fell in love with the life and writings of Martin Luther. So much so that he translated many from the original German because he felt existing translations had missed the mark.

In his diligence and with study and devotion, John W. Rilling eventually became a Lutheran minister, pastor, and preacher. He also, as it turns out, became a writer. Today, I am privileged to have possession of a “first edition,” hard back copy entitled, “Have a Good Day”… Sermons by John W. Rilling. Inscribed on the inside cover:

I, not knowing the Latin which would have been the language of the Learned and the Church in Dr. Rilling’s day, happily used my modern day technology to attempt translation:

“To John, my son,” …. not, to my son John, which would have sounded trite and diminishing, but to John, my son, which echos a voice from heaven which speaks, this is my Son, whom I love, my only son. As my father was to his father.

“Tolle Lege! Tolle lege!”… Take up and read! Apparently from the account of Augustine’s conversion to Christ in his spiritual autobiography ‘Confessions’. My grandfather read widely. His home office and study was filled floor to ceiling with books of the great thinkers of the day and of history. These were his plea to his son, who did not take much to books but rather to fixing and tinkering, to go himself to Word and words and find the truth for himself.

“Dum vivimus, vivamus!!” … While we live, let us live. Don’t wait. Don’t waste a moment. Do it now!! Grandfather’s hand has corrected the spelling of the first “vivimus” which he originally wrote “vivamus, vivamus.” He edited himself, in pen, in inscription, because the proper tense was essential for understanding.

It is amazing what meaning travels down across generations. I am not sure my father, John F. Rilling, ever read this book, though it kept its place on a bookshelf spanning many moves, many jobs, many travels. It came to him 5 months after the birth of his first child, a son. And remained through life’s changes, including the last. My father died a year ago and his beloved wife saved the book for me.

Today, as I read it, sermon by sermon, it shows me who my grandfather was. I had an inkling but must confess I did not know him. The book literally speaks across generations. The phrasing and the storytelling, the meaning so subtle and profound, the message as true today as it was in the 1950’s when it was spoken to a dear congregation. It begs me to read it out loud. So powerful are its thoughts, I have to take a day or two between readings to digest what he’s written.  Who knew the old could be made so new again?

Such is the power of words, carefully culled and selected, so they might be collected in a book to be published and shared. And signed. What a treasure. What a trust. What a miracle.

If today we communicate wirelessly by an internet we can’t see, is it so impossible that words may speak across generations and even, perhaps, across the veil?

My grandfather could not have known when he wrote them that I would ever read his words. They were published before I was born. Yet, they have landed on me and touched me deeply. Gone straight to the heart of another one who didn’t set out to be a writer, rather a thinker and a doer. But something in me kept nagging…you’ve got to write that book so others can know and do for themselves…you can write that book.

“While we live, let us live!

I live among the self-sufficient. Everybody’s “got this.” “I’m good,” they say. They don’t need my help, don’t entertain my suggestion, don’t want my advice. In fact, accepting help taints their ‘I can do this myself’ capacity, the capability we pride ourselves with here in America, land of the free, home of the brave. Independence is where we stake our claim.

So, if I want them to know that there may be another approach or a new way, I am told I should ‘lead by example.’ That is acceptable, inoffensive and safe. If they notice, good. If not, well I’ve shown them. It’s not my job to turn them around.

But what if what I do is “not do”? That is, what if I choose to withhold my words or resist action? This really leaves the door open to all sorts of supposition. People may surmise, “Oh, she’s such a wimp.” Or, “She lets them get away with everything.” Or even accuse, “Why doesn’t she come to their defense?”

Here, I credit the Positive Coaching Alliance who suggests that we be sure to ‘tell them why you did what you did.’ This is especially true when our actions are silent. Speaking dispels misunderstanding. We don’t do it to tout what we did or draw attention to ourselves, but rather to be clear. And, to open the door for conversation and discussion. Why? What were you thinking? How did you decide this? What will you do now? Would you do that again? All valid questions. All essential so they can consider it for themselves. What would they have done if they were in my shoes?

And if, as has happened all too often, my actions were not what I wish to have conveyed, now I have  a forum to talk about that, too. “I shouldn’t have said that and next time I will do this…”

So many of us, though, shy away from this conversation. We want to let our actions speak so we don’t have. We like to quote the old standard of St. Francis “Preach the gospel at all times, and when absolutely necessary, use words.” Certainly yes. We don’t want to invade someone with overbearing expressions. Too many have used fear and force to do this. We would do well to be gentler, but we are challenged to go and tell.

Is it cowardly just to witness with my ways and let them draw their own conclusions? Am I hiding in plain sight, choosing to keep quiet about my faith lest someone might catch me doing something unChristian and call me out? Are we people who hide behind our good deeds and figure that’s good enough for God? Or are we meant to risk letting the Jesus show so that when we explain the why behind what we did or the why not behind what we didn’t, we testify to the truth.

I just love people who get creative about it. In fact, I am grateful because they give me ammunition and impetus to challenge myself to speak faith in a way that those who might not yet know the Lord will be tempted to consider Him. Now here’s someone who speaks it in style. 370Z style. 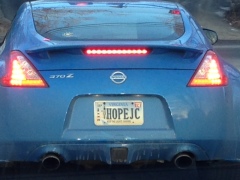 What message are we leaving behind?

How about this guy? He drives around with the message on his plate. I posted it to my Facebook page. Why not? Easter is coming. A harmless question … for the win. But I had better “be prepared to give an answer to everyone who asks (me) to give the reason for the hope that (I) have.” (1 Peter 3:15) I have found that the right word is rarely as important as the timely word.

Posted in Body, In Action, Life