Election Day: You were worth it 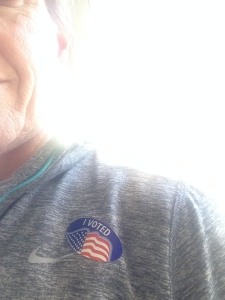 Frankly, had it not been for the woman who climbed the steps to my porch a few weeks ago to introduce herself and tell me what she brought to the race for the office she was seeking, I probably would have been among the ranks of the apathetic on this election day. But we visited for a bit. She listened as I told her about an issue of particular concern to me. Then we chatted about her three grown boys who nearly matched my three grown girls.

So, when election day came I thought, if I don’t mark anything else on my ballot, I’m going to the polls so I can cast my vote for her.

Well, that’s when I realized how uninformed I was about the other races going on. It’s not easy to cram for an election, you know. Trying to find details about candidates, their positions on issues, their voting record or even their character traits – even with the magnificent internet – is a research project I really didn’t want to undertake.

I dabbled a bit and then headed to the polls, certain of only one vote I would cast. Along the sidewalk outside the elementary school, I gamely accepted both pink and blue sample ballots and then settled into a chair in the hallway, put there to accommodate the long line of voters waiting their turns. There was no line and no competition for a seat. So there I sat and scanned, like a kid hoping to glean just that little bit of information that will earn him the passing grade on the imminent test.

Then I entered the nearly vacant gym, produced my ID, got my ballot, and sat to bubble in (completely) for the candidates I had selected and the bond issues I chose to support. Satisfied, I fed the ballot into the machine that would tally my votes. Whew! What a relief.

That’s when I looked up into the face of a white-haired gentleman, whose furrowed lines all led to the kind smile beneath his well worn WWII cap. He stood, poised to deliver my ‘I VOTED’ sticker.

“Put it right here,” I told him, indicating my left shoulder. He did, and with such joy that I just had to shake his hand.

“Thank you for your service,” I said.

“You were worth it,” he replied.

What if my life were on that ballot? The poor excuse for due diligence, the casual approach to decision-making, the haphazard consideration given to allocation of resources. What if, after casting that vote, I got to shake the hand of the one whose sacrifice made it all possible, and He replied, “You were worth it”?